It was a still evening as the sun set over the bay on the landscape in front of my art studio, and I specifically painted this oil painting to celebrate the rare remaining coastal woods in the area that animals call home. Stanwood is the closest town to the south. We are at a crucial time where City and County Council’s decisions directly affect what happens to this land by either creating tax incentives for landowners to preserve wild spaces, create nature preserves, support the creation of self-subsistence rural home lots, or they can provide incentives for large corporate track home developers and businesses to alter the landscape forever. Other areas in the state that have preserved their way of life and have created large green spaces for habitat and recreation are the ones with the highest appeal and have the greatest tourist draw ($$). Their communities and businesses benefit immensely from visitor’s revenue. And they are not the only ones who benefit: so will the ecosystem and the wildlife that call this place home.

Even though I created this garden design painting in the states, it’s fitting I post about it now in Chile, initially inspired by the dreamy courtyard gardens at Huilquilemu – a large Spanish era colonial villa southeast of Santiago used for community festivals and currently under restoration by the local university. The garden in Chile was originally planted by a well traveled widow 150 years ago that brought plants from all over the world for her yard. When I visited, the space was a little wild, but that added to the mystery of the place. Araucaria (monkey Puzzle tree, indigenous to Chile) palm and pine shaded the geometric layout of the grounds.

Huilquilemu as well as the two parks in Seattle (Greenlake and Volunteers Park) created by the Olmstead Brothers in the early 1900s inspired greatly my “secret garden” design here. My painting explains the type of trees and plants to comprise the approximately 2 acre garden as well as the surrounding wall plantings and the 4 additional entrances besides the main gate. I chose the trees according to aesthetics and viability in the Pacific Northwest. My grandmothers in Chile and Washington State were both avid gardeners and both planted gardens where they lived, leaving a legacy of a large variety trees, plants and flowers. Many of these are drawn into the secret garden blueprint. 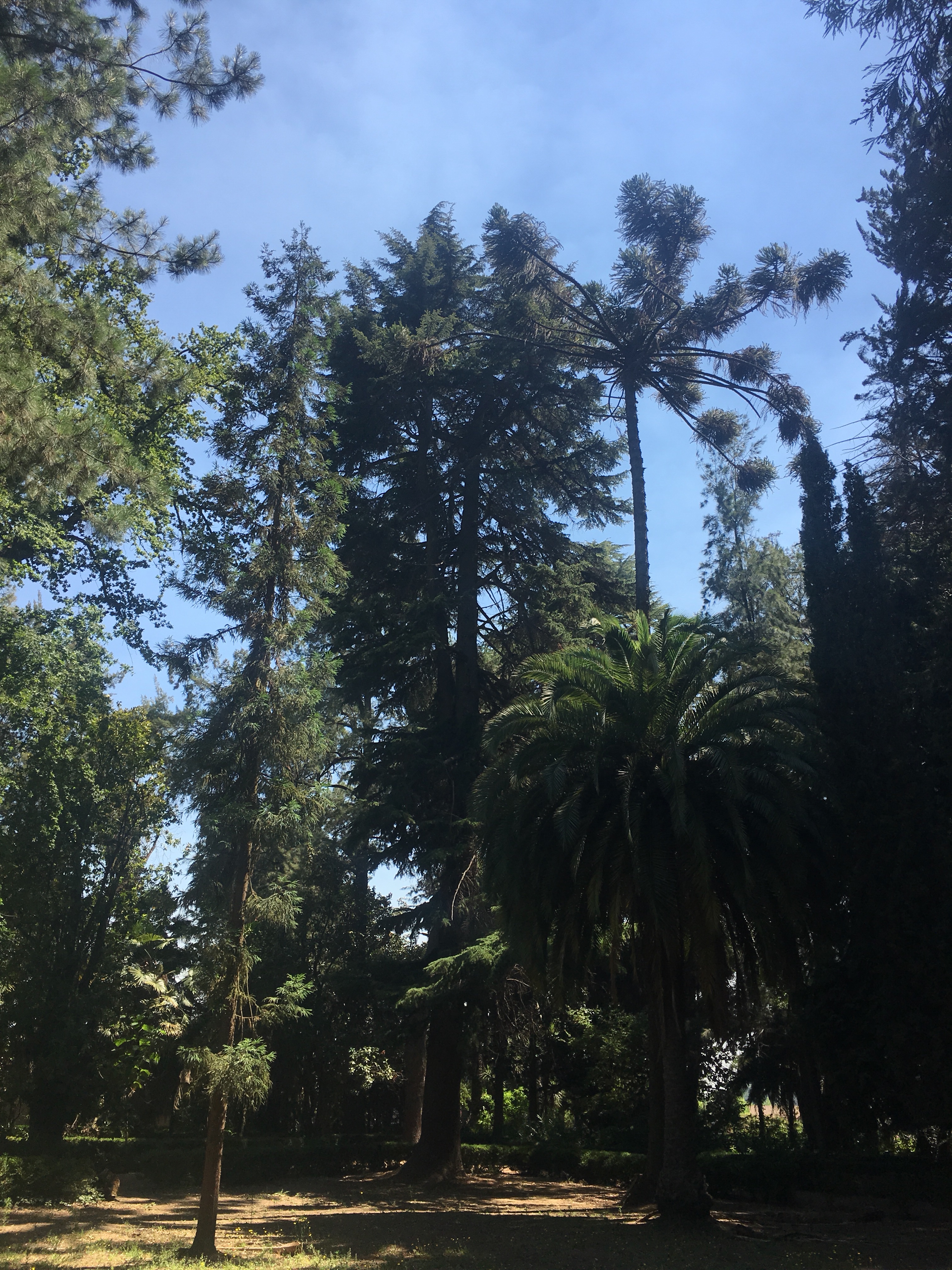 I drew inspiration for this piece from Gauguin’s “Jacob Wrestling With The Angel” 1888. Overall, it is an image to serve as a meditation guide beginning with an element of gratitude.  Gratitude for trees, flowers, love, the Divine Feminine, the Divine Masculine, dancing, fish (salmon), birds and totem animals (seen behind the human figures).  Gauguin stated: “Don’t copy nature too much.  Art is an abstraction; derive this abstraction from nature while dreaming before it, and think more of the creation which will result (than of the model). This is the only way of mounting toward God – doing as our Divine Master does, create.” 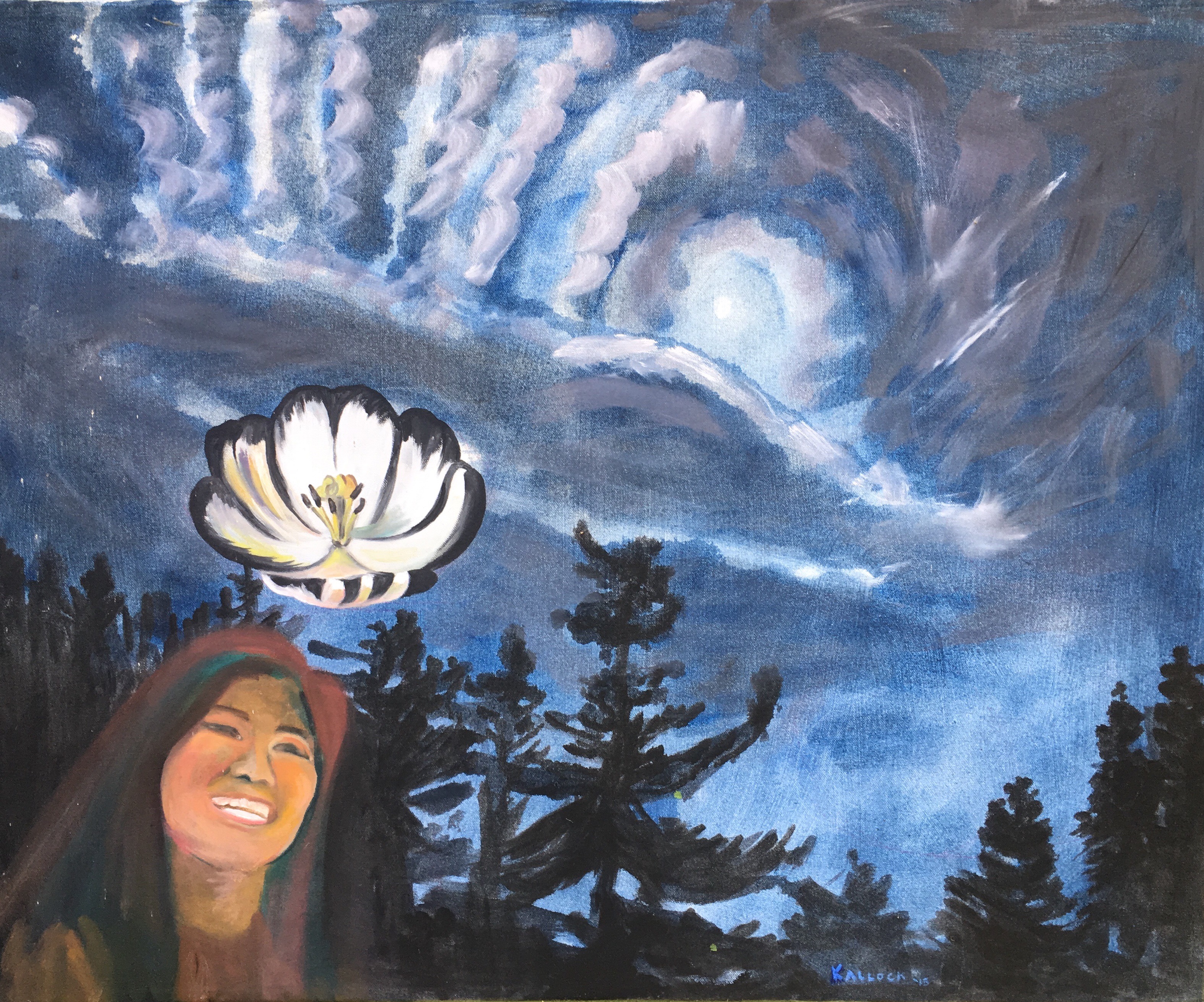 It was late summer. The summer the great forests burned throughout the lands North and West. We got in the car after some deliberation, after a sense of unease, after a feeling that the ghosts of the morning may not loosen their grip on the rest of the day, but I got in the car anyway. Bridge (we’ll call him that for all intents and purposes because lately he’s been a bridge between the light and the heavy) really wanted to explore the delta. The river spot had called to him for years. He had always imagined looking across the rail road tracks over where the tall trees grew, where the river called to be explored. I said, “Wow I’ve been thinking the same thing for years also!” which was true.
Now we are walking, on the foot trail atop dike that contained and paralleled the river. We passed an older couple who didn’t engage until I said hi. Bridge looked tall, and good, and confident. Different to whom he had been previous the encounter with the optimistic wise woman. We continued on, seeking to break from the deafening trains and highway noise. This lead us over the decayed rail road bridge, and past the two teenage party spots, and further along the gorgeous river bank. The trail made it’s way through deciduous woods and then a clearing and began to disappear and reappear, to the left and then to the right. We had to duck numerous times under blackberry bushes that caught our hair and our clothes. We continued this way until at last Bridge found a spot where he was content. He was looking at an immense log jam stacked by the currents into a near traversable mass on closest branch of the river.

I laid out my homemade neoprene picnic blanket (the traditional red checkered square pattern) on the bank and we munched on organic chips and carrots as Bridge Google-Earthed the delta. Sure enough, the log jam was against a little island on which he was determined to set foot. I sat in the cool shade and watched the immense volumes of water swirl deceptively slow, sparkling, reflecting dark and quietly. The trees rustled in the cool breeze, and yet still, in this idyllic spot, I could not stop thinking of Lights. (We’ll call him that for all intents and purposes because he still manages to illuminate my thoughts.) I hadn’t seen Lights in years, and we only communicated in a strange pictoral and telepathic way, indescribable because I had never experienced anything like it before.

Bridge began to build a bridge. Precariously jumping between two long fallen trees, across a sizable gap of quiet, fast moving current, Bridge proceeded to balance, carry and throw 70lb plus logs to build a traverse back to the riverbank where I sat. I watched this as if watching a movie, detached and consumed by thoughts of Lights and his sublime influence, and of recent social theories adding beauty and nature to innate human needs. I soon snapped out of it and realized what a fun little adventure it would be to cross Bridge’s bridge, which I did. Then we jumped cautiously from log to log and emulated tightrope walkers across another by holding long branches.   Once on the island, as our footsteps sank into the soft sandy bank, the beauty and privacy of the location began to take hold. I thought how Lights would also cherish this river landscape.   We found a flat sandy spot near the banks with a generous vista down and up river and I laid my head on Bridge’s lap where he massaged my head and helped me focus my thoughts. Allow for receptivity, my mind repeated. Let this day on this riverbank be a gift from paradise, a gift from nature. We were both there at that moment, on a Friday, mid afternoon. We weren’t on a highway. We weren’t at work. We weren’t in our homes. I reached higher, higher, reaching for full receptivity. I quieted my mind and allowed for the gift as day. We took our clothes off, laid down his coat and made love. 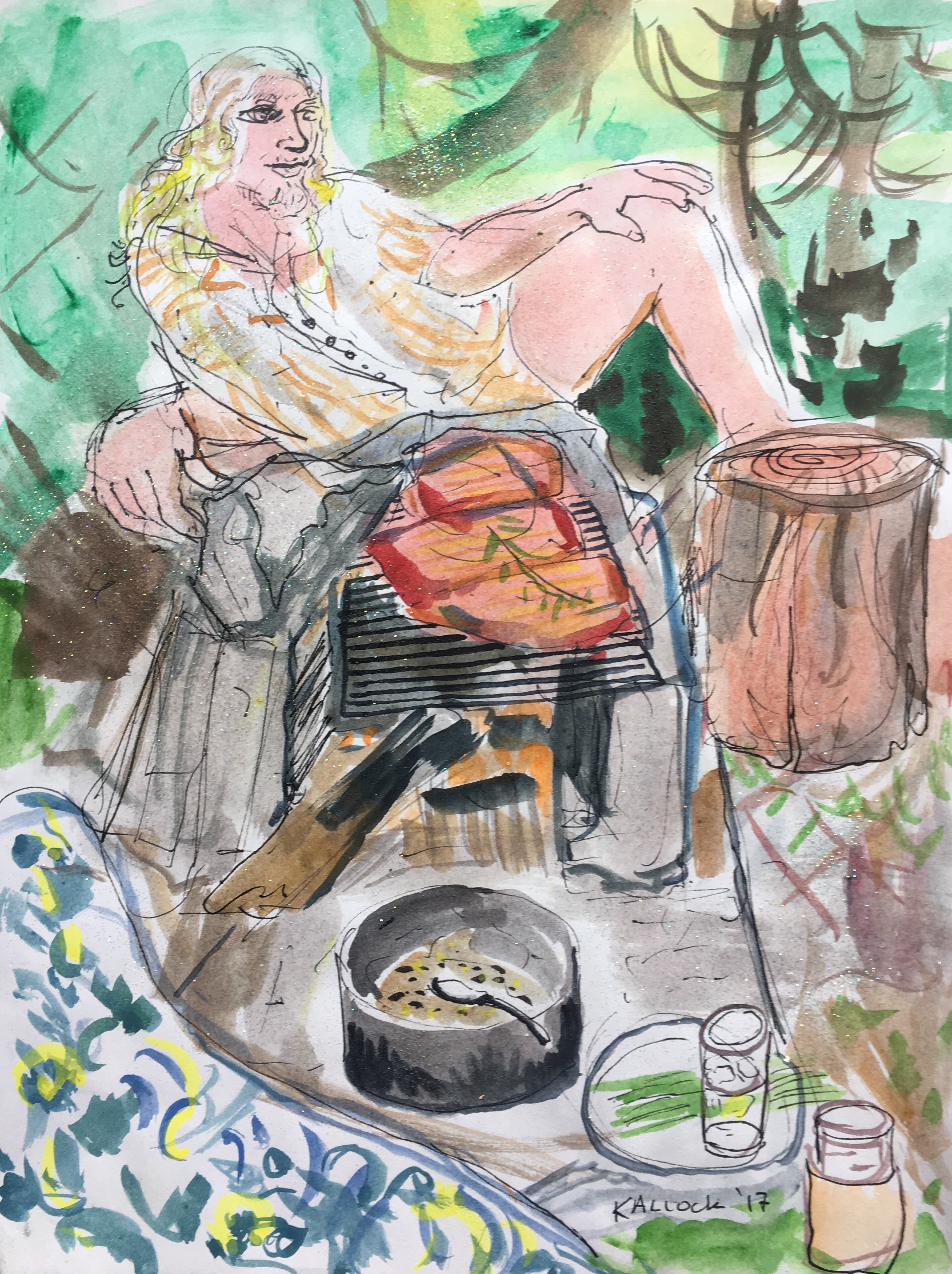 Lounging Forest Salmon Picnic, watercolor and pen on paper, 12 by 9 in. Emilia Kallock, 2017 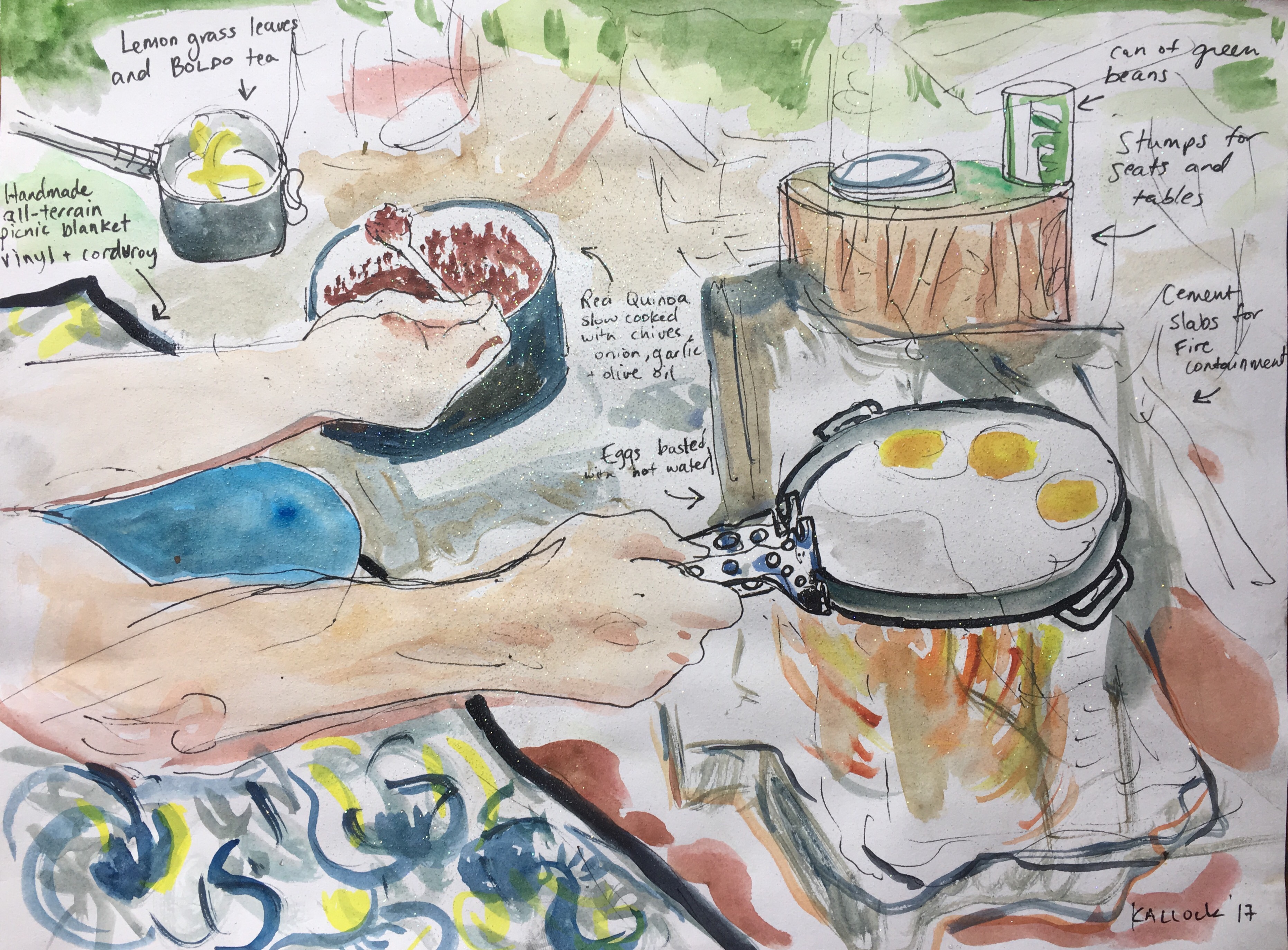 Trees Are Not Agricultural Products, watercolor on paper, 12 by 9 in. Emilia Kallock, 2017 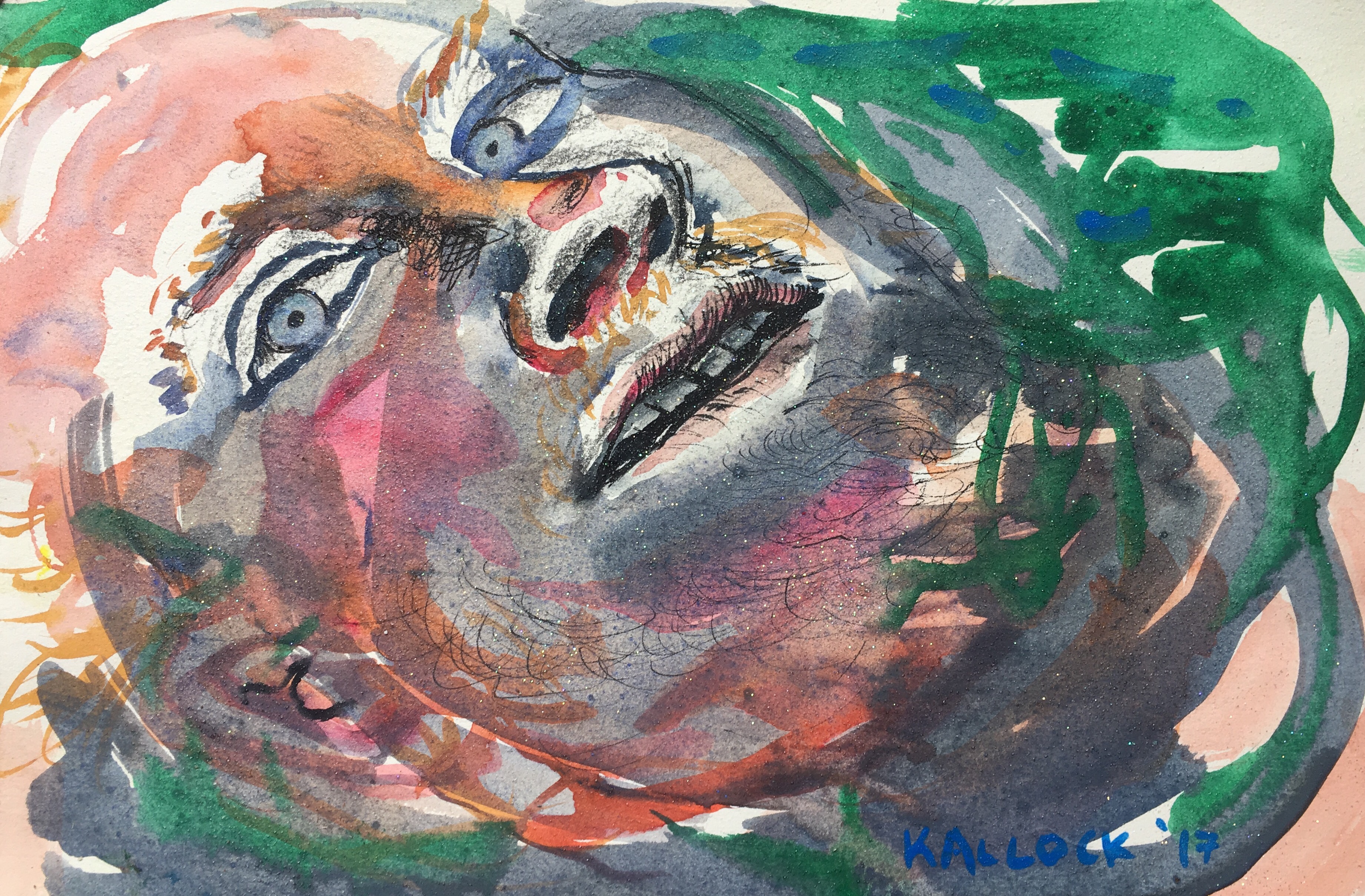 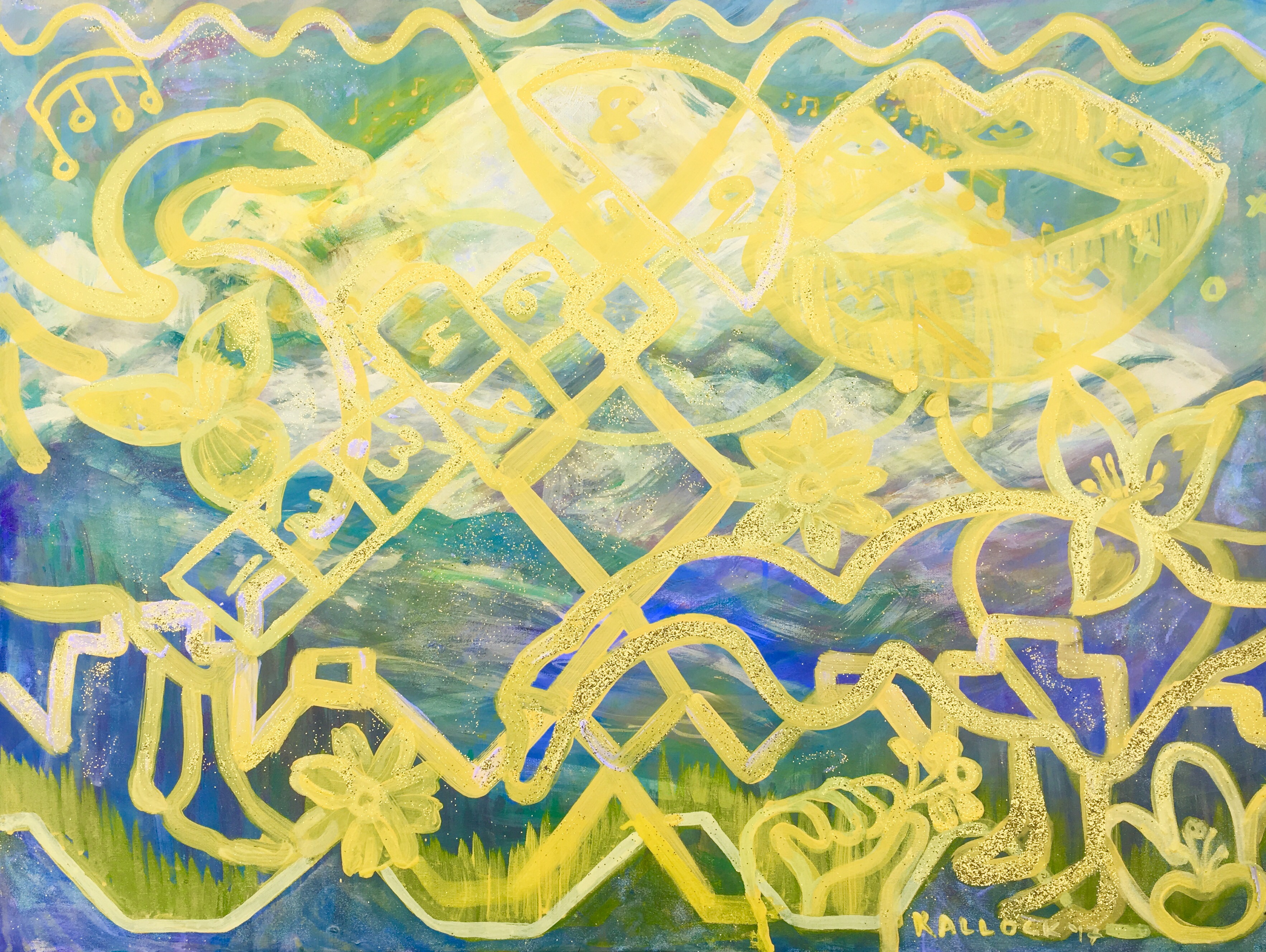 The Power Punch Painting; Peace, Joy and Glory, acrylic and glitter on canvas, 30 by 40 in. Emilia Kallock 2017 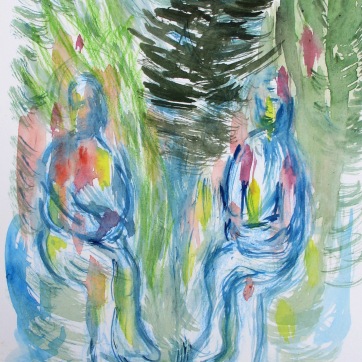 If You Could Have a Tree Planted In Your Honor What Would It Be?, watercolor on paper, 10 by 8 in. Emilia Kallock 2016 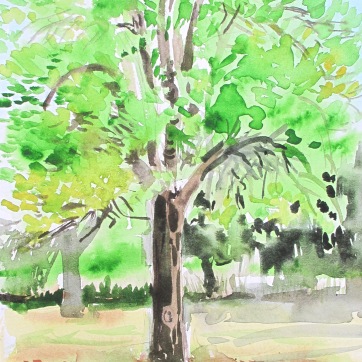 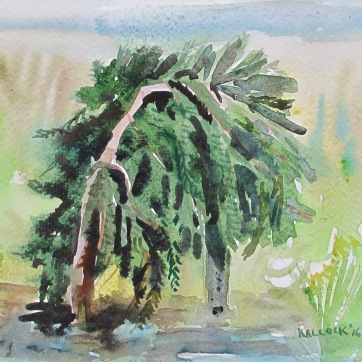 Study of Weeping Pine, watercolor on paper, 5 by 8 in. Emilia Kallock 2016

Trees move closer towards the spotlight for me, and I spent the better half of yesterday doing watercolor studies of some of my favorite, some to be used in a larger piece.  I sat on the ground to do most of these, while the mosquitos attacked and my daughter kept me company for a while.  The thought crossed my mind how wonderful it would be to plant a tree in honor of friends, family, loved ones and the sketch “If I Could Plant One Tree In Your Honor What Would It Be” ensued. 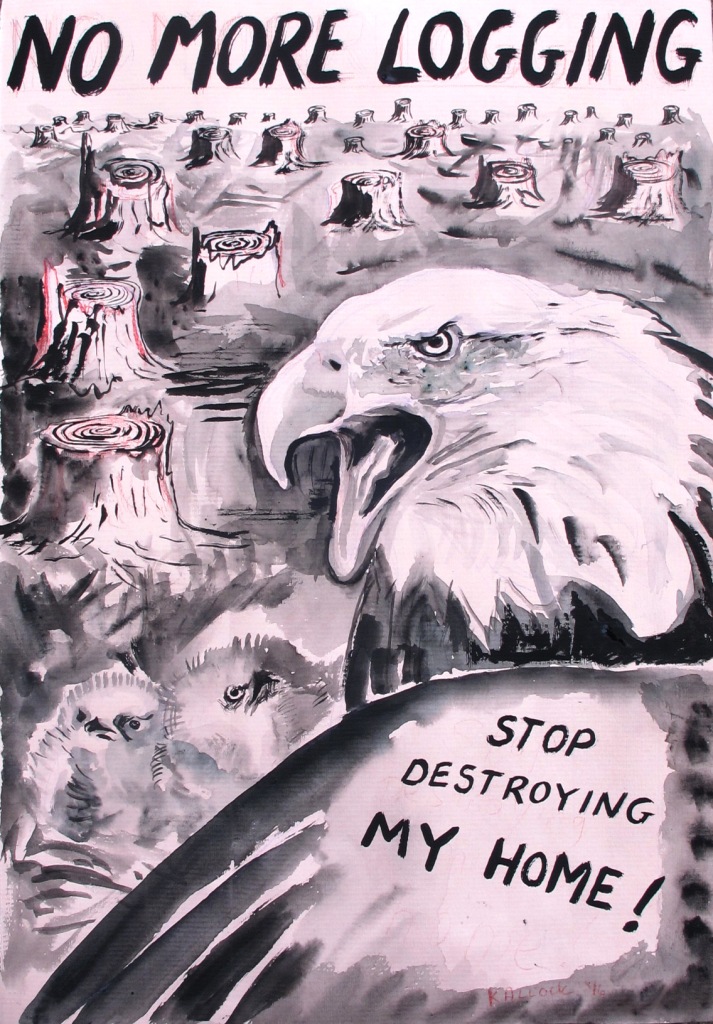